The other day I got a postcard from P.C. Richard & Son about their President’s Day sale and was about to toss it into the garbage when something on the card caught my eye.  It was the logo and words “Celebrating 110 Years”!

You see, I never would have noticed it, and it certainly would never have taken up a millimeter of brain storage space – IF NOT for the fact that my own company is contemplating throwing a 10-Year Anniversary Celebration!

The truth is that outside the company’s own walls, nobody cares about a company’s big milestone.  It’s easy to get caught up in the hubris of hitting a milestone anniversary and forget the fact that the customer really doesn’t care however many years old you are. In the words of Ms. Jackson, “What have you done for me lately?” is the primary question that customers ask. A 100-year heritage doesn’t really answer that question.

So I’ve learned that as counter-intuitive as it may seem, a company anniversary celebration should not be about the organization. It should be about the change we’ve created during that period of time. It’s about the people we’ve been fortunate enough to serve and work with. It’s about our clients, partners, staff, and friends who made it all possible.

Ladies and gentlemen, I’ve got a lot of work to do. More coming…

A large portion of my time is spent with my sales team.  Interviewing, training, coaching, commiserating and celebrating (lather-rinse-repeat)…

When interviewing candidates, the one-and-only ingredient that I look for is persistence. Confidence, enthusiasm, smooth-talking and dressing sharply are all attributes for success.  But the crucial character trait that will make-or-break a salesperson is persistence.

I’ve seen salespeople invest weeks and months into potential opportunities, only to walk away right at the finish line.  As Ross Perot says, “Most people quit on the one-yard line. They give up at the last minute of the game one foot from a winning touchdown.”

According to marketing Experts:

One more fast fact: 80% of prospects say “no” FOUR times before they say yes! It’s a process that they need to warm up to. Did you get that?! 44% of salespeople give up after the first no! You have the perfect product, vendor, and price – simply the time is not yet right. Yet most salespeople have given up by that point, when in fact the “no” was merely part of the sales process rather than a final true “no”.

Note:  Too many salespeople believe that persistence means putting their prospects on a quarterly call list. That isn’t persistence.

Persistence is a lot closer to a child asking for candy; they keep asking until they wear you down, completely unimpressed and unmoved by your objections. If you feel strongly that you can make a difference then you should be trying relentlessly to get their attention!

I think back to how it all started.  Despite having the most professional and well trained sales team in the world (!), our team occasionally needs a “boost”, a spark of motivation, or just a plain “kick-in-the-pants”!

I started sending out a weekly email to my sales team sharing some war stories of my own time in the battlefield of sales.  I’m not the expert, but I’ve made enough mistakes to warn others…

I added a few friends to my email distribution list to gather some feedback, and it was they who suggested (pushed me) to turn the email into a weekly blog and share it with the greater public.   Today, with over 10,000 subscribers I want to thank every one of you for reading, sharing, and most of all commenting and giving constructive feedback to help me make this better and better.

I promise to get back on schedule (no better way to make sure it get’s done than to announce it in front of 10,000+ people!) and I’m looking forward to next week Tuesday’s blog. 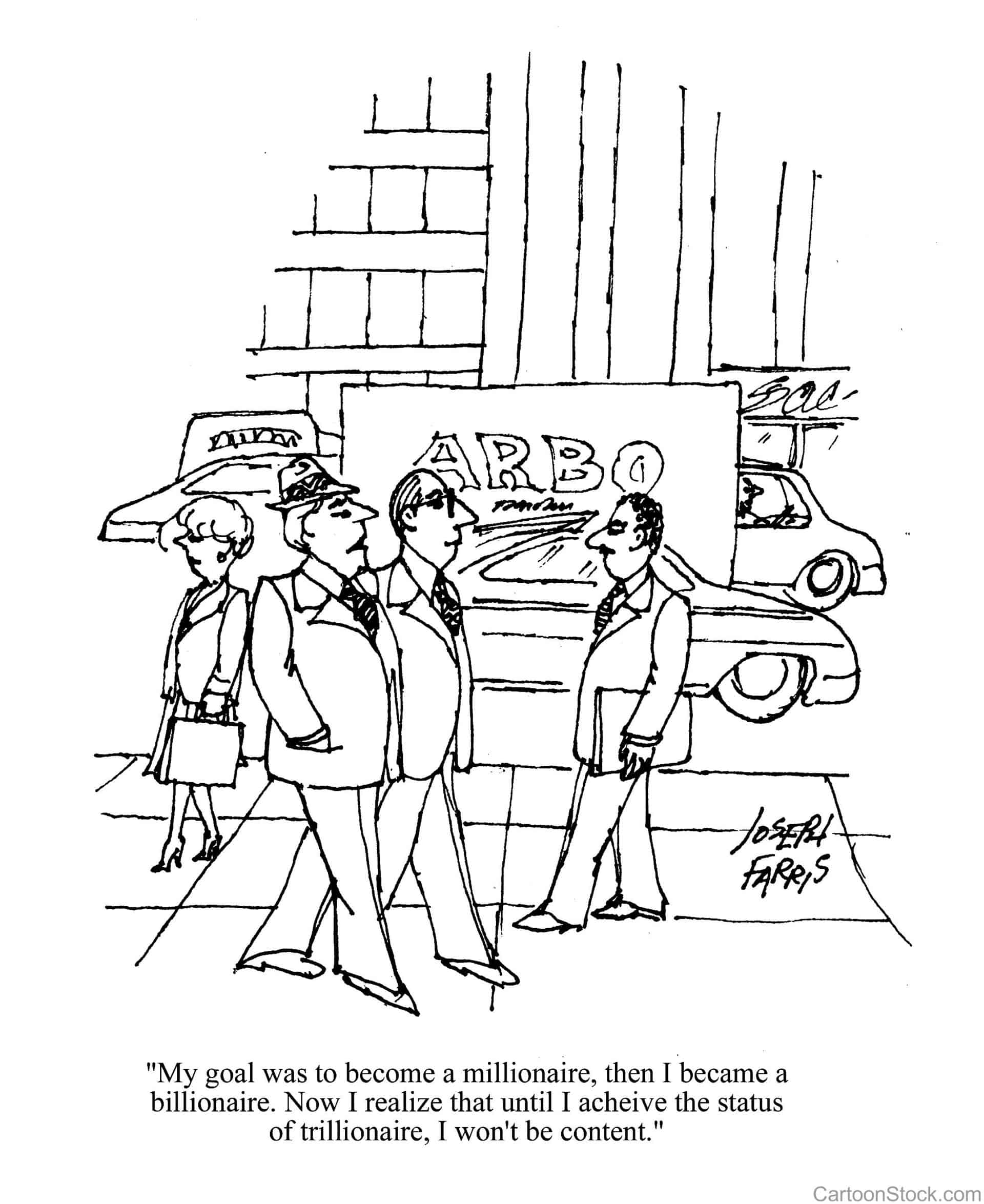 My friend tells me he would be happy with $10 million. Another sets his limit at $10 billion. All of us have calculated a number that would enable us to quit the daily grind. We dream of the day when we can say adios to the rat race. We aspire to a life free from commutes, meetings, deadlines, office politics, and expense reports.

But there are some who have managed to accumulate enough cash to quit working forever. Yet, instead of heading off on a permanent vacation, many of the mega rich remain in the workforce. And these affluent professionals really work. Many devote more than 40 hours a week in jobs that are oftentimes banal and stressful.

The question is, why?

For one, oftentimes they have nothing better to do. Usually in order to become that wealthy, you typically have to work more than 40 hours a week. Being a workaholic doesn’t leave much time for other things. So when you drop out, what else are you going to do? Your whole life was work.

For many, call it ego, insecurity, or the need to be the big kahuna, but it’s also hard to give up an exalted status. Or they tell themselves they will get out when they are the king of the hill, except there’s always a bigger hill to climb and conquer.

Michael Norton, a Harvard Business School professor, had a particularly elegant model for understanding this. Norton says that research points to two questions people ask themselves when determining whether they’re satisfied with something in their life: Am I doing better than I was before? And am I doing better than other people?

Many achievements in life are hard to quantify or compare.  So people turn to money as a comparison that can be quantified. “Am I making more money? or Does my house have more square feet? or Do I have more houses than I used to?”

This instinct to measure and compare doesn’t disappear once people have an obscene amount of money. And if a family amasses, say, $50 million but upgrades to a neighborhood where everyone has that much money (or more), they feel a lot less rich… Hence the ever-shifting goalposts of wealth and satisfaction.

However for some mega rich, they never set out to be rich. They set out to pursue a passion.  That enthusiasm doesn’t go away even when people hit that mega level of wealth.